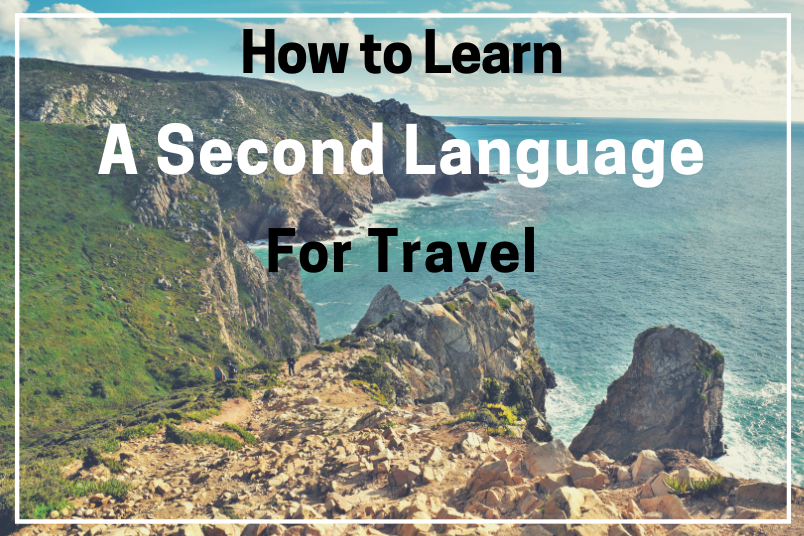 The most disorienting aspect of travel, especially when visiting foreign countries is the language barrier that exists when you don’t know the local language. Traffic signs, menus, and food in the grocery store is all a cause for confusion, not to mention when you ask someone for help who doesn’t happen to speak your native language. Learning a second language can help mitigate these circumstances.

Learning the language of the destination you are heading to could help alleviate many of the pains of navigating the country. The biggest misconception of all is that you have to gain complete fluency to know a language; this couldn’t be further from the truth. If you can get yourself to a strong, beginner grasp on a language, enough to have simple conversations and read traffic signs, your travel will be significantly better and more fulfilling.

When you are communicating with people in their native language and making the effort to align to their culture, you never know what sort of kindness will come your way. Those situations are often the beginning of the best travel stories!

The best way to start is to identify the second language you want to learn. That sounds simple, but you need to choose a language that excites you and will motivate you to travel to certain regions of the world that speak the language. If you grew up in the United States, it’s likely that you either took Spanish or French classes in school. Most likely, it didn’t really stick; the reason for that is you didn’t really have a strong motivation for learning the language.

I learned Spanish in school, but as is the story with most people, I didn’t advance quickly and lost a lot of interest in the subject. This was largely due to the fact that I didn’t have real world situations where it was necessary. Even though I knew some Spanish speakers, I had never been to a Spanish speaking country. However, in college, once I traveled to Spain for 12 days, it all changed. I was determined to gain an intermediate fluency in Spanish.

The next semester in college, I signed up for an elementary Spanish course that was helpful, but ultimately I became disengaged because once it became a class, it was a nuisance. I needed to get a good grade; it was no longer about language learning. However, I was able to lay a foundation that would help me when I struck out on my own.

Thankfully, nowadays there are plenty of options available to those looking to learn a language, especially at a beginner level. Listed below are some of my favorite options that have enabled me to gain a beginner to intermediate level of fluency in Spanish.

By far my favorite platform for learning a language is Pimsleur. The Pimsleur method was established by Paul Pimsleur in the mid-1900’s and focuses on the repetition of learning new words using a system of graduated interval recall. In simple terms, it will introduce new words to you and then remind you of them over and over again, but each interval in between the reminders gets longer and longer until your memory has retained the word permanently.

It’s a brilliant application that gets you speaking from day 1 in your second language. I have gained so much confidence speaking Spanish by consistently taking my daily 30-minute Pimsleur language lessons. A half an hour lesson is the perfect amount of time to fit into your day, whether it’s on the commute, during lunch, on a walk, etc. It trains your brain to quickly recall words in your second language and preps you for the fast pace of most conversations.

Unfortunately, like most good things in life, Pimsleur isn’t free. However, gone are the days of purchasing the lessons in a bundle for hundreds of dollars; now, they have a subscription-based service where you are billed monthly and have access to all the lessons in your second language.

Pimsleur is offering a 7-day free trial for their subscription service which you can try out here. If you don’t like it after the first week, cancel the subscription and try something else listed below.

Duolingo is a great app to use in tandem with Pimsleur, because with Pimsleur you are speaking and developing conversation skills and a native accent, while in Duolingo you are building reading skills including vocabulary and grammar rules.

The best part about Duolingo is that it’s absolutely free, which makes language learning accessible for all. Doing Duolingo regularly will expose you to a good selection of vocabulary, and there is a minor speaking aspect of the app as well which you can turn off if you’re in a situation where speaking isn’t appropriate (saying random Spanish words from your cubicle would raise a few eyebrows).

I highly suggest running through a Duolingo lesson daily, just to keep the language fresh in your mind. I usually fit in a lesson or two right before I go to sleep which has worked well once I was finally able to make it a habit.

Duolingo is available on iOS and Android. If you download the app, it will carry you through the registration process. You can also access Duolingo through a web browser here.

Babbel is an app similar to Duolingo, however unlike Duolingo you have to pay for Babbel. That being said, it offers a better interface with lessons that are grounded in a reality and building conversation skills. It’s a slightly different approach to language learning than Duolingo but altogether pretty similar.

The reason I put it on the list is because the Babbel community is great. They are constantly posting challenges and the interaction on social media is fantastic. It’s a great way to get into a community of language learners like yourself who will keep you accountable in doing your daily lessons.

Look out for deals on the platform, specifically at the beginning of the year. I was able to buy a year subscription that included 6 months for free, which was a bargain. To find more information on Babbel, click here.

The best app or subscription-based learning platform will only do so much; to gain an intermediate level of fluency, you have to find self-directed ways of exposing yourself to the language on a consistent, daily basis.

That being said, if you don’t have the drive to gain some level of fluency and you just want to learn a few phrases to enhance you travels, skip this section. The above apps will cover that for you easily.

Change the Language on Your Phone to Your Second Language

Once you have put in the work on the apps for awhile and have a basic vocabulary in your second language, switch you phone settings to your target language. This may be scary at first, but it forces you to interact in the language every time you look at your phone (which for most people is like 100 times a day).

I recently employed this tactic and it has been monumental in moving forward in my language learning. It’s not even that I’m learning much new material, it’s more about the exposure to the language and the consistent reminder and motivation it gives you to follow through with your daily lessons. I highly suggest doing this, even if you are uncomfortable at first – it’s a minor form of language immersion.

Read and Listen in Your Second Language

People often suggest reading or listening to the news in your second language as a great learning tool, but I tend to disagree. To the beginner language learner, native speakers often seem to be speaking way to fast for comprehension. Therefore, when you are trying to listen to the news or even read it, it’s difficult to use context clues, especially if you don’t know what they are talking about beforehand.

For beginners, I suggest reading and listening to material that they are very used to in their native language. That way, when you are trying to comprehend the target language, you have a strong point of context to help you along.

I am a huge Harry Potter fan; I have read the series probably 7 times all the way through and I’m intimately familiar with the story. Therefore, in order to bring my Spanish learning to the next level, I found a Spanish book and audiobook version of the first Harry Potter.

The best method I found was to read the first chapter, slowly at first, researching words that you don’t understand. Then, once you have researched the unknown words, read it through one more time faster, focusing more on context clues to guide you through. Then, I would listen to the audio track for the first chapter and try to keep up with the native speaking speed. If I didn’t feel like I understood enough, I would read the chapter again, rinse and repeat.

This method takes a lot of self-direction and patience, but it is by far the most effective language learning method I’ve found. It’s painstakingly slow at first, but before you realize it you are getting faster and faster and your comprehension is increasing by leaps and bounds.

Seek Out Native Speakers in Your Target Language

This is by far the most difficult but most necessary aspect of learning a second language; speaking to native speakers in your target language. It’s intimidating because no one enjoys looking foolish or feeling inferior. However, the reality of language learning is that you’re going to make mistakes constantly because that’s the only way you learn.

Speaking with locals is the true reason behind learning a second language for travel. We all yearn to connect with the people on a better level and language is the best way to do that. To accomplish this, just speak with people in your target language whenever you have the chance. Force yourself to be uncomfortable. It’s easier said than done, and I still struggle with this immensely, but once you do the rewards far outweigh the stumbling mistakes you’ll inevitably make.

Overall, the most important aspect of language learning is consistency. Don’t spend 8 hours on the first day crushing language lessons and then fail to complete a single lesson the next month. Take a bite size amount each day and before you know it you’ll have an arsenal of vocabulary in your back pocket next time you encounter a native speaker in you target language.

This site uses Akismet to reduce spam. Learn how your comment data is processed.